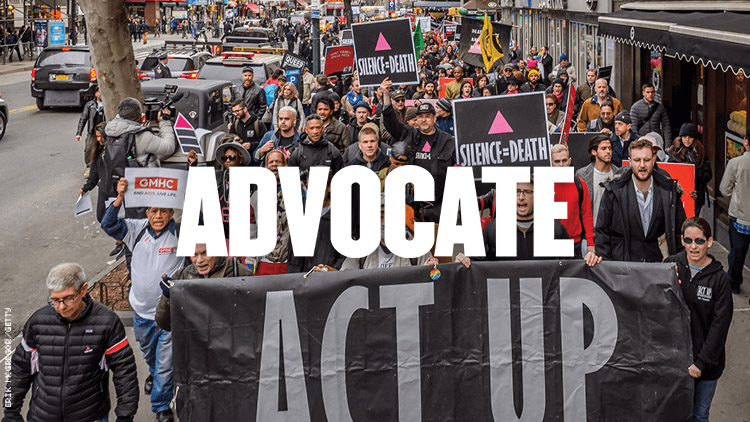 World AIDS Day and the Continuing Need to ACT UP

Each day as I absorb the daily COVID news and grim statistics, my body shudders with familiarity. We’re exchanging the same words as we did during my youth as a gay man in New York City in the early 1980s: “They are getting tested.” “He has it.” “She’s positive.” “Did you hear who died?” It’s now all back in macabre vogue.

However, today we interrupt our regularly scheduled pandemic to observe World AIDS Day. We recognize the other epidemic, which is still ongoing — the one we have been at battle with for 40 years now. The one still without a vaccine.

Here are the current statistics from that epidemic (according to PrEP4All) since they don’t run on a chyron 24 hours a day on cable news:

5,000 people still die annually — two-thirds of which are gay and bi men or transgender women.

Every 20 minutes there are new infections — more often than not, that person is likely to be LGBTQ+, low-income, and a person of color.

How can it be there are still so many infections now that we have PrEP (pre-exposure prophylaxis, which is highly effective in preventing HIV)?

According to PrEP4All, the exciting young AIDS activist organization organized in the tradition of ACT UP, 1.2 million people in the United States should be on PrEP, but only 241,000 are.

“A gay black man in Mississippi is six times more likely to die from HIV than a gay white man in New York City,” James Krellenstein, executive director and cofounder of PrEP4All, told me.

We as a community have a moral imperative to erase that gap, and PrEP4All is leading that fight. Like the COVID promises being thrown around these days that everyone who wants a vaccine will get a vaccine, Krellenstein pointed out that we need the same commitment for PrEP. He emphasized, “PrEP is the most effective method of HIV prevention ever invented — reducing the risk of HIV acquisition by over 99 percent if taken daily. If we can transform the price of PrEP from $2,000 a month to roughly $6 a month — the same monthly price as a single cup of coffee at a chic coffee shop — we could really transform the HIV response in our country.”

And now is our moment to seize. In the coming months, it is believed that there will be a competitive market for generic versions of Truvada, the first drug that was approved for use as PrEP. And when there is, PrEP4All intends, like its ACT UP forebears, to use direct action and political advocacy to fundamentally change how the American health care system is dealing with the HIV epidemic. The organization will work to reallocate the $2 billion spent annually on PrEP to free drugs and clinic care for the people who need PrEP. And the leftover money will go to cover support services like housing, transportation, and sex education.

While World AIDS Day was formed to be a global day of recognition to increase awareness and prevention efforts, it is also the perfect occasion to create more AIDS activists to enlist in the fight. If we’ve learned anything, it’s that it is critical for us to take care of each other.

Young queer people are inheritors of a legacy of both activism and grief. It is difficult to make AIDS activism feel as urgent to them as it still is since they aren’t spending all their time in hospital rooms and at funerals like my friends and I did when we were in our 20s. But there are a few useful tools beyond the statistics that activate us.

Everyone should be following @theaidsmemorial on Instagram and its potent hashtag #whatisrememberedlives. See what we lost — the artists, the poets, the prophets, the agitators, the leaders. These ghosts and their stories are in all of our care. And watch the Academy Award-nominated documentary How to Survive a Plague to witness how it took citizens, especially the LGBTQ+ community, to band together to fight AIDS because our local, state, and federal governments were inert. You’ll see how all the COVID drugs being quickly approved is a direct result of the incredible work of ACT UP and Treatment Action Group on AIDS drugs. It’s proof that activism works.

The urgent, unassailable truth 40 years later is that “Silence [still] = Death” and it is still time to ACT UP.

Jul 13, 2021 After Pride Month, Let’s Make Resolutions to Support Our Community Pride Month is over. The rainbows in store windows and on garish socks have… Read More
May 18, 2021 Heartless GOP Pols Are Sacrificing LGBTQ+ Kids for Political Gain This year has been challenging for all parents in heretofore unimaginable ways, but for… Read More